It happens when – and where – you least expect it.  A worm appears where he should not be! You might run into it or look up and see a tiny green worm hanging from the trees and branches right over your head! Why is a green worm hanging mid-air above you and what is it?  For those people that do their best to avoid worms at all cost, this mid-air monstrosity (as tiny as he may be) can be a nightmare!

Those little green worms are actually called cankerworms (a variety of inchworms). There are two variety of cankerworms – fall and spring cankerworms.  If you look closely enough at them, you might think they resemble caterpillars more than worms. 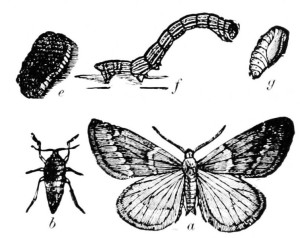 The larvae descend from the trees and branches in the spring on tiny (almost invisible) strands of silk – that is what you see when you see the worms suspended in mid-air – they’re actually larvae on strand of silk making their way to the ground!  They do this when they are ready to pupate.  When they reach the ground, the larvae worms will dig their way into the dirt, and spin a cocoon where they wait until fall. When they hatch, they will be wingless moths that will climb up the trunks of the trees and start the cycle all over again.

Thankfully, if these tiny worms land on you as they descend from the trees, they will not hurt you.  The only real damage that they do is to trees – in small numbers, they are not too much of a problem, even for trees. However, a large population of cankerworms can be a big problem – they devour the tree’s leaves, defoliating them – the more there are, the worse it is for the trees – sometimes if there are enough of them – leaving no leaves at all! (You’d have to have a serious infestation for this to occur).

If your problem is serious enough, and you want to do something about these tiny green worms, a good solution is using pesticide. Another really effective solution is something called “tree banding”, in which a “band” is secured around a tree’s trunk to prevent the cankerworms from climbing into the tree.

What are vermicomposting worms?