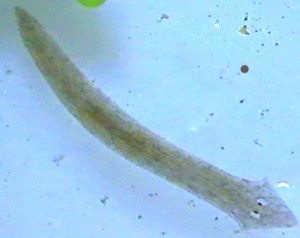 Image of a Planaria worm, commonly found in fishtanks, different from Detritus worms!

If you can see tiny white worms floating around in your fish tank there is a high possibility that you have either planaria or detritus worms. On the internet alot you’ll find that people are saying the tiny white worms in your fish tank are likely planaria. You should look carefully at the worm however to help distinguish it from the detritus worm to make sure you know which one you have, as these are very different worms.

Detritus worms
It’s worth hoping that the tiny worms you see are the detritus worms. These types of worms are very common in fish tanks, most commonly living in the gravel, and most often in fishtanks in need of cleaning or that have seen overfeeding. They look like very thin, white, worms, and wiggle around quickly. These types of worms are not typically anything that you have to be overly concerned about, and fish will even eat them. They can even help with breaking down waste. The worms themselves eat decomposing matter in the tank (the reason they live in the gravel). Sometimes however, if your tank gets dirty enough, the number of these worms can get huge and you can even see them crawling up the sides of the tank! Regular tank cleanings should help fix the problem.
Here is a video showing detritus worms to help with your identification:

Planaria worms
Planaria are thicker and flatter than the detritus, and kind of look like little slugs. They have a head-shape if you look carefully.  Planaria are not in the tank because it needs cleaning, or because of overfeeding, but rather they come in often from live plants. They are flatworms, and can multiply if they are cut in half!! Also, they are not always white, but can also be brown, grey, or black, and can grow to as long as half an inch. Unlike Demetritus, you do not want or need Planaria in your fishtank – they can harm fry and weak fish.

Here is a video showing a planaria which should help in your own identification.