Any pet owner knows that whenever you walk your dog and he squats down to take a poop, you need to go behind him and check his poop. What are you looking for? Odd colors, odd smells, runny poop, or (in worst case scenario) creepy crawlies – like worms! So what happens when you see the worst thing imaginable? You’ve squatted to take a look and you see tiny worms in your dog’s poop! What are they and what do they mean?

If you see worms in dog poop, it means that your dog is sick and needs to be treated. What kind of sickness and what kind of treatment he needs depends upon which type of worm is in his poop!

These are the most common kind of worms found in dogs – they are intestinal parasites. Your dog can be infected for a bit of time before these worms appear in his poop. When they do show up, they will resemble strands of cooked spaghetti – they are a few inches long, skinny, and off white or light brown in color. Some puppies are born with roundworms which they catch from their mothers. Other more adult dogs can get round worms from eating infected mammals (like mice and other rodents). Also be aware that roundworms can be passed to humans by touching infected poop or soil – children are especially prone to this as they are often playing outside and may not be very good at regular hand washing.

Symptoms of Roundworms: Symptoms in your dog of having roundworm include: vomiting, diarrhea, potbellies, and eventually worms in the poop! Call your veterinarian for treatment.

Tapeworm – in dog poop, you might not see the whole worm, just some of the little “rice” like sections.

These types of worms are the least harmful found in dogs, and they are also easily recognizable! Tapeworms are easily spotted in dog poop – they look like little white pellets of rice. In addition to the poop, you can sometimes see the around the rectum of the dog (under the tail).  Tapeworms are not easily transmitted to humans, although sometimes rarely it can happen (if you swallow an infected flea).

Symptoms of Tapeworms: Symptoms in your dog if they have tapeworms include: vomiting, diarrhea, gas, and abdominal pain. Another sign your dog could have tapeworms is if you see him/her scooting his bottom along the floor in an attempt to itch the area – while this does not always mean he has tapeworms, combined with some of the other symptoms, it could be a good indication. Tape worms can be easily treated by a vet.

Hookworms – you won’t see them in poop 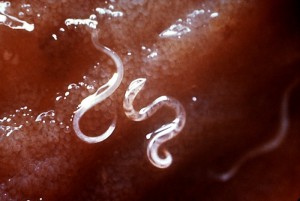 You’re unlikely to see the hookworm in dog poop, they’re too small.

Hookworms are another type of worm found in dogs that are also intestinal parasites. They are however very small and often are not seen in your dog’s poop – your vet would likely be the first to see the evidence that your dog has hookworms.